Africa and Asia at Risk of Zika Virus Exposure

More than two billion people could be at risk from Zika virus outbreaks in parts of Africa and Asia, according to scientists writing in The Lancet Infectious Diseases.

Populations in India, Indonesia and Nigeria are some of the most vulnerable to transmission, the researchers said.
They used data on air traveler numbers to help model their predictions.

However, they acknowledge that immunity to the virus could already exist in some areas and could reduce the risk.

The research team, from the London School of Hygiene and Tropical Medicine, Oxford University and the University of Toronto, Canada, said “vast numbers” of people were living in environments where it would be hard to prevent, detect and respond to the virus.

They looked at factors such as the numbers of people who traveled from Zika-affected areas in South America to Africa and Asia, the presence of mosquitoes that can pass on the virus, and the climate in the regions to assess which countries could be most at risk from an outbreak. 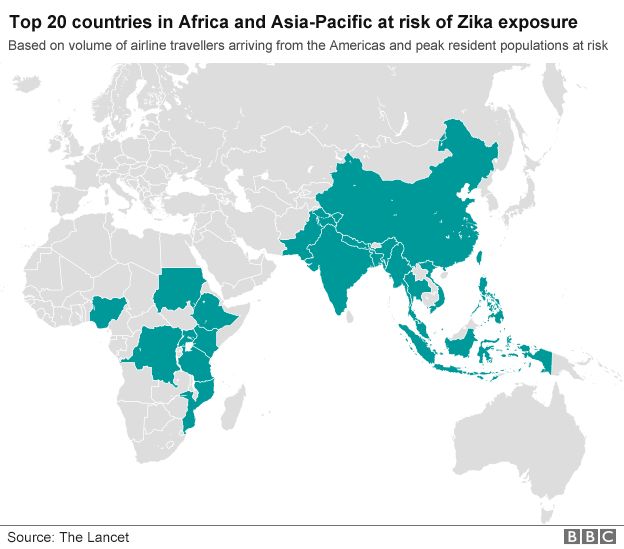 In their study, the researchers suggest that the Philippines, Vietnam, Pakistan and Bangladesh could be particularly vulnerable to a Zika outbreak because of their limited health resources.

Dr. Kamran Khan, study author from St Michael’s Hospital in Toronto, said: “The impact on populations will also depend heavily on the country’s ability to diagnose and respond to a possible outbreak.”

And he added: “Our findings could offer valuable information to support time-sensitive public health decision-making at local, national, and international levels.”

Singapore is dealing with the first outbreak of the virus in Asia and recently pregnant women with symptoms in the city-state were advised to be tested for the virus.

In Brazil in 2015, Zika virus was linked to an unprecedented rise in the number of children being born with unusually small heads, called microcephaly.

But the researchers said there were still many unknowns about the virus and how it spreads, including which species of mosquito transmits the virus and whether some populations are immune to the virus because of previous outbreaks in the area.