Still, Beal knew it was something he needed to attend. He needed to represent not only as a black man, but as a black athlete. He needed to hear the stories, see the families, listen and process the questions being asked. So the 23-year-old hopped on a red-eye flight from Las Vegas the night before. 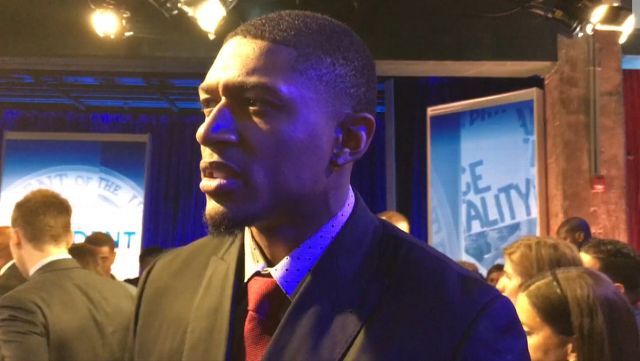 On Wednesday, the day before the president’s town hall, basketball stars Carmelo Anthony, Chris Paul, Dwyane Wade and LeBron James opened the 2016 ESPYS with a call to action for athletes to stand against police brutality and the unfair treatment of black lives in America. A few days earlier, Anthony, a forward for the New York Knicks, urged athletes in an Instagram post to make their voices heard, beginning with demanding change like other athlete-activists, such as Pro Football Hall of Famer Jim Brown and the late boxer Muhammad Ali, have done in the past. “What they did [Wednesday] night was a start and it’s very important to be able to say that,” Beal said. “It’s not about race. It’s about what’s right and what’s wrong at this point and it’s about change. We’re gonna do whatever it takes to see change and it starts with us athletes because we have a positive voice and I think that people will listen to us if we decide to speak.”

The town hall wasn’t the first time Beal had attended one of the president’s speaking engagements. Every speech leaves him with the desire to do more for the community, he said, including becoming more involved with Obama’s My Brother’s Keeper initiative, which focuses on helping young men of color stay on the path toward reaching their full potential.

Beal believes athletes making their voices heard won’t be just a fad, but something that will last as long as social injustice continues to occur. The first step, he said, is for them to look at themselves in the mirror and figure out what they can do better as people. The next step is moving out of the comfort zones that so often keep athletes confined and silent.

“I think sometimes athletes, we’re too caught up in what people will think of us when we have a reaction to a social injustice situation that we’re in,” Beal said. “When we voice our opinions, we lose fans because they may not like what we say or they may not agree with what we say, so some athletes kind of hold their [tongues]. At the end of the day, it’s not about what other people may think of you. It’s not about their opinions … it’s a matter of what you stand up for, and you have to stand up for what’s right.”