ICYMI: This dad and son are leading the league in emotions Grab a tissue as you watch this dad pull off the best birthday surprise ever

It’s not Father’s Day, but it’s a good day to showcase Devon Fowler. Just as Fowler’s son, Braheim, thought his 12th birthday was forgotten, things took a different turn for the Pennsylvania family. Fowler surprisingly came through by gifting his son a baseball bat that he’d wanted. His documented story has since gone viral.

“I had that bat a few days before his birthday. He was surprised. He got emotional,” Fowler said on SportsCenter. 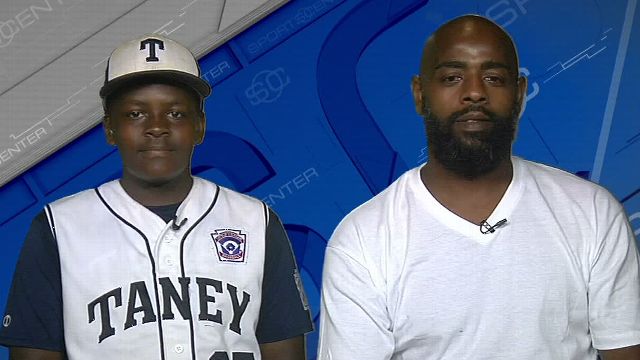 Braheim had just finished his baseball game. He’s a Little League player for Philadelphia’s Taney Dragons. You might remember the Taney Dragons as the team that made history with female pitcher Mo’ne Davis on the mound at the 2014 Little League World Series.

Braheim’s father was filming as he congratulated the 12-year-old on a wonderful game. But Braheim was having none of his father’s praises. Nonchalant with his head hung low, he had no words for his dad.

“We got a big game today,” the dad said as they walked to the vehicle.

“You still mad at me?” he asked his son.

Fowler asked Braheim to go to the trunk of a vehicle to retrieve a box. Braheim got out of the car, opened the hood of the vehicle and there was a green baseball bat. Once he figured out his father actually remembered his special day, he became overcome with emotion and began to cry.

“You’re about to make me cry,” Fowler said to his son.

Fowler and Braheim joined SportsCenter, where Braheim expressed his love for his dad … and his new bat.

Braheim said he and his dad had a moment.

“I opened the box and knew it was a green bat and I’ve loved daddy since,” Braheim said. “We had a moment right there.”