What’s it like to be a black woman in Hollywood? Look no further than Leslie Jones, one of the stars of Ghostbusters, directed by Paul Feig, which was released last weekend. The comedian/actress who recently came to more fame as a player on NBC’s Saturday Night Live has been getting constantly harassed on Twitter since the movie came out, and the social networking site has done little about it.

Compare that to what happened on singer Taylor Swift’s Instagram account, where her public row with Kim Kardashian, the wife of rapper Kanye West, is playing out in these internet streets. Without getting into the long details of the feud, when Swift was getting a lot of heat in the form of snake emojis all over her comments, the app began to delete them, according to reports.

Many celebrities have come together in support of Jones under the hashtag #LoveForLeslieJ. But the 48-year-old wasted no time in shining a light on her harassers and being open about her feelings on the matter.

Exposing I hope y'all go after them like they going after me pic.twitter.com/ojK5FdIA0H

Calling people apes and monkeys is the oldest form of lazy racism in the book, but this is another ugly turn in what’s been a difficult marketing schedule for Jones. She couldn’t even find a designer to work with her for a dress for the premiere of her own movie. “It’s so funny how there are no designers wanting to help me with a premiere dress for movie,” she tweeted last month. “Hmmm that will change and I remember everything.”

As for this latest episode, whether or not she returns to Twitter is still in question. She said that she was leaving the platform on Monday night. 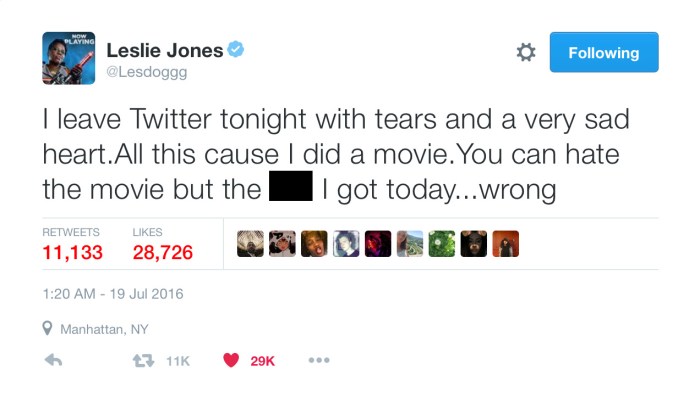 Expect her to come back even stronger on the next season of SNL.