As Scott McKinley awoke yesterday still processing the death of his longtime friend, Philando Castile, he contemplated how he’d break the news to his son.

He decided to give it to him straight: Castile was killed during a traffic stop by a police officer who feared him because he was black. Hearing the news, his son, Scott Homer McKinley III, appeared momentarily confused before responding.

McKinley was holding his son last night during a protest rally in memory of Castile outside the home of Minnesota Gov. Mark Dayton. He tried his best to fight back tears.

“For my son to ask me whether he was going to be killed by the police was hard to hear,” McKinley said. “If that wasn’t a sign for me to come out here and stand with my people, I don’t know what is.” 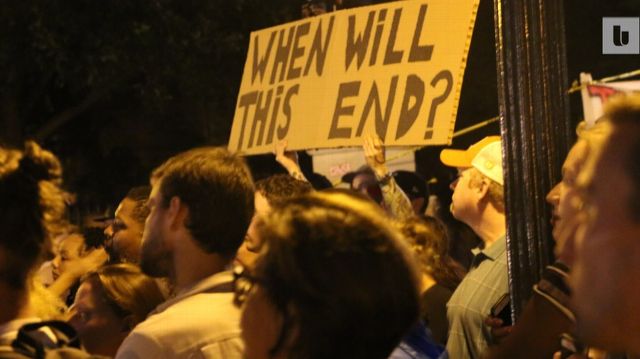 About 400 people from the Twin Cities metro region — black, white and brown, young and old — stood together in a loud protest last night outside the governor’s mansion in St. Paul, about a 10-minute drive from the intersection in the suburb of Falcon Heights, where Castile was killed.

Law enforcement around the perimeter of last night’s protest increased by the end of the night as reports started to emerge about the shootings at a Dallas protest rally that left five officers dead. But the protesters in St. Paul — fueled by food and beverages donated by local restaurants — were involved with their constant chanting and singing and appeared not to know what was happening in Texas.

Zachary King came to the rally wearing a black T-shirt with white letters that read “THAT COULD’VE BEEN ME—PHILANDO CASTILE.”

When King heard the details of Castile alerting the officer who stopped him that he was carrying a concealed weapon, he thought about what happened to him a few years ago. King was leaving a Minneapolis club on Father’s Day 2012 when a police officer noticed a bulge in his waistband. When the officer approached, King said he put his hands out and said he was licensed to carry a firearm.

“He walked up like he was going to ask to see my permit,” King said. “He called over officers and they came over and beat me.”

The incident, which was well publicized, left King’s head and face badly bruised.

“Everybody knows that when you’re black and you’re concealing that you have to be extra careful,” King said. “If I was white, that would have never happened to me. If Philando was white, he’d still be alive.”

Many of the black men at the rally had similar stories about encounters with police in the Twin Cities region. David Starks, who was raised in South Minneapolis, was also targeted at a nightclub back in 2010 where he says he was denied entry because he was wearing a fur coat and security staff worried that it was concealing something. He left, only to be pulled over by the police a few blocks away.

“The cop asked me where I was going, and I told him, ‘None of your f—— business,’ ” Starks said. “He snatched my door open and pulled out his Breathalyzer. Since I never made it to the club, there wasn’t anything to pick up. I’ve had my rights violated by police many times.”

When Starks was asked why he came to the rally, he recalled a conversation he was having with his niece about the deaths of Castile and Alton Sterling in Baton Rouge, Louisiana, over consecutive days.

“It hurts,” Starks said. “I haven’t cried this hard since I was 10 years old and my dad died.”

“My father is black, and you know how many times he’s been pulled over in his car and thrown on the ground in front of me?” Ives-Pridgen asked. “I don’t get nervous when a cop knocks on my window, but my dad does. I’m out here because that could have been my dad who got shot. You know what keeps us oppressed: white silence and white privilege.”

The video showing the final moments of Castile’s life seemed to be the tipping point for the whites who made up most of the crowd at last night’s rally. Gonne Asser, who moved to St. Paul from Bethesda, Maryland, 25 years ago, placed a homemade sign that read “Black Lives, White Accountability” on the front gate of the governor’s home.

“I could only watch a few moments of the tape, and I was horrified,” Asser said, as a chant of “Power to the people” filled the air. “We feel like we’re so progressive here, but this shows that we’re not. It’s heartbreaking.”

Asser’s husband, Sunil Bawa, is Indian and she wonders how her son’s life would be if he were a few shades darker. “I’d be terrified,” she said. “My [black friends] have to deal with that all the time. How can I live in the same world and not do anything about it?”

When Kiley Duffy, who is white, heard about yesterday’s rally, she wondered what she could do for support. She persuaded a friend who owns a Jamaican restaurant to donate food. When she set up her table at 11 p.m. filled with jerk chicken and coconut rice, the aroma immediately attracted a crowd.

“I had to do something,” Duffy said, tears welling in her eyes. “This is just ridiculous that these incidents keep happening, and they keep allowing it.”

Not far from Duffy’s table, McKinley was chasing his son, who was getting his second wind at the late hour. McKinley, 26, is a carpenter who has stayed clear of the law his entire life. But he said that no matter how much he tries to avoid interactions with police, officers always find a way to harass him. And that makes him worry about his son and his future.

“I was outside my cousin’s house last week and the police rolled up and said to us ‘what the f— are you guys doing, get off the corner,’ ” McKinley said. “The vulgar language they address us with, there’s no reason for it. There’s no reason for us to have that type of conversation just based on the color of my skin.”