This was supposed to start with a long, drawn-out reference to the movie Friday — the Golden State Warriors as Deebo and the Cleveland Cavaliers as Craig. The NBA Finals would be the fight at the end of the movie. And all this would be accurate if the fight stopped at the point when Deebo had Craig in a sleeper hold on the car.

Such was the case in Game 2, an evening that resembled a crime scene more than a championship game. If the series ended on Sunday — a lot, prematurely or not, believe it did — Draymond Green would be the front-runner for Finals MVP. Following a double-double in Game 1, Green had a buffet of wide-open shots (another defensive adjustment that exploded in Cleveland’s faces), finishing with 28 points, seven rebounds and five assists. It’s not like he went into Sunday believing he had to be more aggressive either.

“I don’t come into the game saying, ‘Oh, I have to shoot a lot more,’ ” Green said. “Like, that’s not me. That’s not what I do for this team. But at the end of the day, if the game says shoot, you’re supposed to shoot. Because usually when you don’t, it turns into a disaster.”

Golden State is averaging 107 points in the first two games. Normally, that would be a team’s most impressive stat, but defensively Golden State is living in Cleveland’s jerseys, holding the Cavs to a paltry average of 83 points a game. Thus bringing us to the Cavs’ LeBron James.

Over the weekend, James, much like the rest of the world mourned the passing of Muhammad Ali. The four-time MVP offered perhaps the most poignant comments of any athlete.

“He’s part of the reason why African-Americans today can do what we do in the sports world. We’re free,” he said Saturday in Oakland, California. “They allow us to have access to anything we want. It’s because of what they stood for, and Muhammad Ali was definitely the pioneer for that.” 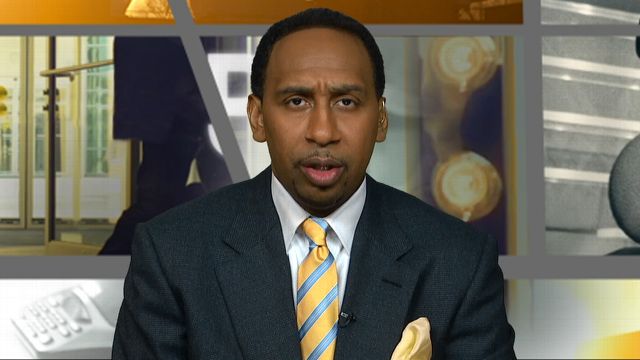 Ali’s worldwide appeal and impact is essentially unrivaled. But James is one of the rare individuals who can approach attesting to similar pressures and responsibilities that comes with being an athlete of supreme influence. Which is why, now, James has to channel his inner-Ali. These Finals are his version of Ali’s “Rumble in the Jungle.”

Much like 32-year-old Ali heading into that fight, the 31-year-old James is the underdog against the younger, more powerful and seemingly unbeatable foe. Ali’s opponent, George Foreman, was 25 with a record of 40-0 with 37 knockouts. The Warriors, of course, went 73-9 in the regular season and are two wins shy of officially becoming the best team in NBA history.

Through the first two games, the Cavs’ combinations have done everything but land. Bench play was slightly better in Game 2 and, again, the Cavs outshot the Warriors at the free throw line. Yet, Golden State’s swarming defense once again gave Cleveland fits all night. The Cavs’ problems are massive. J.R. Smith was again a no-show. Channing Frye can’t see the court for more than five minutes. Kevin Love has a concussion (that Andrew Wiggins trade gets scarier and scarier). Kyrie Irving had two early baskets to start the first quarter, then just three for the rest of the game. And because of Golden State’s ability to close out on the 3-point line, Cleveland, the team that hit 25 pointers in one game a month ago, are only 12-for-44 from beyond the arc in the series.

About the only thing that went right was Iman Shumpert’s floppy, high-top fade that perfectly resembled Roger Klotz’s from the Nickelodeon show Doug.

These Cavs picked the absolute worst time to look shell-shocked. And, as with everything in his career, the buck starts and stops with James. Entering Sunday, James had won nine consecutive Game 2s after dropping the first game of a playoff series. While he once again nearly notched a triple-double — 19 points, eight rebounds, nine assists (and four steals) — the most glaring statistic was the seven turnovers (which felt more like 15).

There’s a chance this series could end before the first part of ESPN’s megadocuseries on O.J. Simpson airs Saturday. It seems unfair to say James needs to “do more” given the fact no player in the league has had to “do more” for his teams since he entered the league.

“I guess that’s just the penalty of leadership,” a close friend of James’ once said. For Cleveland to have any hope in the series, Freight Train James has to emerge. He has to, once again, put the team on his back and step in the ring with a Foreman-like opponent. The only difference is, unlike Foreman, the Warriors might not tire out from throwing haymakers. Game 3 is officially Game 7 because if Cleveland takes another L — what would be its eighth in a row to Golden State — smelling champagne being sprayed throughout Quicken Loans Arena for the second consecutive June doesn’t become a “possibility.” It’s all but a reality.

If falling down 0-2 is James’ version of a rope-a-dope, his eighth round needs to begin on Wednesday. If not, the #AllInCLE hashtag might as well be #AllOuttaOptions.