Vince Wilfork finally showed us what it looks like to be heavy but healthy. The Houston Texans defensive tackle takes it all off in ESPN The Magazine’s 2016 Body Issue and is totally unbothered about what internet trolls have to say. Then he called out New England Patriots quarterback Tom Brady on Twitter, challenging him to take a dive into the world of sports nudity.

Tommy Boi where u at? Now that I've done @ESPN Mag #BodyIssue I'm ready for the modeling world. Pics out tomorrow! pic.twitter.com/kVLFInAG8M

Well, you will get nothing but praise from us! Listed at 6-foot-3, 325 pounds on the Texans’ official roster, the defensive tackle is comfortable in his skin. And he’s not out of shape either.

“I think some people look at a big guy and automatically assume you’re unhealthy,” he said.

The two-time Super Bowl champ is one of 19 athletes who posed for the annual Body Issue.

“It came together well. When they came to me with it, I was like ‘sure, I’ll do it.’ I’m proud of who I am. I had fun with it. It was lights, camera, action when I got there.”

Once the Texans tweeted the image, folks weighed in. While there were a few critics, others praised Wilfork for stripping down proudly. Check out what a few of them said below:

When the hot pockets are done pic.twitter.com/eC9dpK9Y3E

If looking at an oiled and nude Vince Wilfork at work is wrong, I don't want to be right pic.twitter.com/WYPE6dQOj8

For more from the 2016 Body Issue, check out espn.com/bodyissue and pick up a copy on newsstands starting July 8. 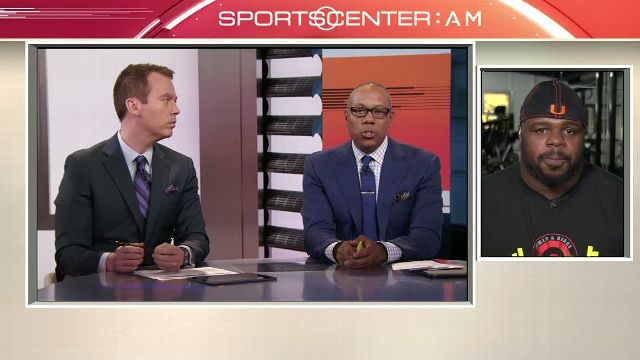