Ask the Cleveland Cavaliers players how business is going these days. Chances are they’re going to tell you, if they follow DJ Khaled on Snapchat, business is booming.

Raptor Kyle Lowry’s comments heading into this series — personally allowing that LeBron James was “probably one of the best players in the league besides [Stephen Curry]” — may or may not have, um, inspired James. He went 11-for-13 from the field (all 11 came in the paint), looking every bit of best-player-in-the-worldesque with a vintage baseline dunk. Cav Kyrie Irving treated the basket like a TV subscription — getting there on demand — turning Raptor Cory Joseph’s ankles into Pixy Stix dust along the way to 27 points. And the Cavs, despite this being just Game 1, didn’t appear enthusiastic about the idea of a long series that its Western Conference counterparts seem hell-bent on providing.

After the game, Irving said “the job’s not over.” He’s right, of course. Cleveland is still three wins away, but much like the Detroit Pistons and Atlanta Hawks before them, it’s hard to imagine Toronto preventing the Cavs from returning to the scene of the 2015 Finals’ crime.

By Justin Tinsley. Because Ryan Cortes is still a bitter South Floridian.

Dikembe Mutombo just demonstrated the Twitter equivalent of a player chucking up an improbable shot while the coach is just itching to bench them … and then the shot goes in, therefore making it a good play.

The 2015 Hall of Famer prematurely predicted the Philadelphia 76ers getting the top pick in the NBA lottery … and apologized for the mishap.

How we imagine Mutombo following the announcement: 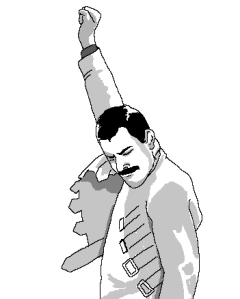 Remember when Kanye West hinted at the notion that Nike signed LeBron James to a $1 billion lifetime contract to stay (or not “run away”) with the mega sports apparel company? He wasn’t joking. GQ‘s Mark Anthony Green got the scoop on the man behind the blockbuster deal.

For those who like asking to hold money — now is your time to shine, friends.

The Atlanta Braves have been really bad this year. The team is off to its worst 37-game start in franchise history (9-28!) while 11 players in Major League Baseball have hit as many home runs this year as the entire Braves team. So the Braves fired manager Fredi Gonzalez on Tuesday. Problem is, this isn’t Gonzalez’s fault. He didn’t pick the players, but got saddled with the blame for a management group that was purposefully trying to be bad this year and secure draft picks before the Braves move into their new Cobb County stadium next year.

Leaving aside the fact that Gonzalez found out about his firing via email (WHAT?), what makes this decision more troubling is this: There are now zero Hispanic managers in MLB, when Hispanics make up nearly 30 percent of the sport. That’s a problem. It’s not merely that so many of the men charged with leading MLB teams don’t look like their players, but that they can’t even speak the same language. It’s really a wonder that a team hasn’t capitalized on this issue by flooding its coaching ranks with Latino managers. After all, James teamed up with Dwyane Wade and Chris Bosh specifically so he could play around his best friends (and because South Beach, of course), so perhaps Yoenies Cespedes and Miguel Cabrera and Manny Machado and Yasiel Puig might all try to play on the same team — and one with Hispanic coaches?

As ESPN’s Marly Rivera astutely pointed out, qualified candidates are out there.

Some savvy non-Hispanic managers have already learned the importance of this. This is what Dusty Baker told ESPN in 2012 about learning Spanish:

“The ability to speak two languages, especially Spanish, helps me not only to be able to communicate, but also to understand their problems, their culture,” Baker said. “When you speak to them in their language, you have a deeper understanding of where they come from, and you show respect and esteem. Moreover, I spent five months playing winter baseball in Mexico, Puerto Rico and the Dominican Republic. All those experiences not only helped me with my Spanish, but also to better understand the reality of those countries and thus, better understand and appreciate the Latino player. I not only understand the language; I also understand when players come here, what a difficult time they have.”

Remember this the next time MLB bathes itself in the memory of Jackie Robinson and Roberto Clemente. https://t.co/AD6z8weTKV

NBC Asian America is doing a five-part series regarding different social topics each Tuesday in May, which is Asian Pacific American Heritage Month. Episode 3 broke down different Asian Americans’ views on the Black Lives Matter movement.

A piece of the floor from the Staples Center sold for $179, 100, but it wasn’t just a piece of the floor. It was specially made for retired Los Angeles Laker Kobe Bryant’s final NBA game, has the No. 8 affixed to it and Bryant signed it himself. The buyer wanted to remain anonymous and we can’t blame you, mom.

A London church has taken to putting up Kanye West lyrics to inspire folks.

Kumail Nanjiani from the HBO show Silicon Valley started a dope and hilarious thread on Twitter Tuesday night mocking the backlash to the all-female reboot of Ghostbusters.

Rougned Odor is suspended eight games for his furious fists — which isn’t unreasonable — but it’s also hard to argue that he isn’t being punished for being a good fighter. Think he gets eight games if his punch misses?

Well this is awkward…

Our brother J.A. Adande has a thought-provoking column this morning arguing that reporters should not clean up quotes, no matter how wrong the grammar. In light of Carlos Gomez’s recent flap with the Houston Chronicle, it’s an interesting read.

“Reasonable people can make allowances for those who use English as a second language. Instead of teasing them for their shortcomings, we can applaud them for successfully conveying their thoughts.”

.@Sixers we were a little busy earlier, but heard you had a pretty good night too. #PHILAfirst pic.twitter.com/okNZnGV6mG