This is what happens when you bet against the best player (sorry, LeBron James) in the NBA. You lose.

One bearded, foolish fan (wearing a Cleveland Cavaliers hat with an American flag on the bill, no less) was filled with so much confidence after Game 5 of the Golden State Warriors-Oklahoma City Thunder series that he promised to eat a T-shirt if the Thunder didn’t hold onto their 3-1 series lead. Welp. 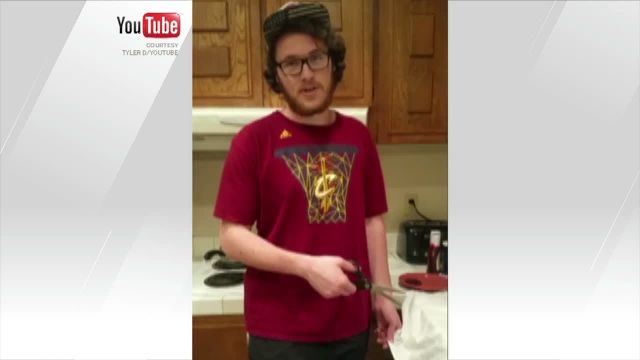 Not only does he douse the damn bites of T-shirt in barbecue sauce, but … he actually seems to enjoy the taste. Look at what you’ve caused Kevin Durant. Seriously.

After the #RunningManChallenge blew up earlier this year, it was bound to be usurped by something, and we may have arrived at it. Meet the #CantYouSeeChallenge, started by Twitter user @ReemRozay. He was inspired by a performance from Pam of the R&B group Total and Diddy at a recent Bad Boy Reunion concert. Now, Diddy is soliciting entries and the results are uproarious:

Here before the #CantYouSeeChallenge becomes adopted by rhythmically challenged folk.

Boston Red Sox outfielder Mookie Betts clubbed three home runs yesterday and if that wasn’t impressive enough, get this: He did so while batting leadoff, making him the first player in Red Sox history to smash three homers atop the lineup. Salute, indeed.

Following the expiration of his season, Thunder star Kevin Durant has a decision to make as he becomes an unrestricted free agent on July 1. Durant (and his agent) already spoke to our own Marc J. Spears to discuss where his mindset is currently; and, among other things, Durant said, “We will figure it out. I will talk to my agent, my best friend and my dad. Just talk to those three guys and get some advice from other people. But for the most part, I will talk to them in the next couple of weeks. I don’t even know where my mind is right now.”

Let us help lay out some of the options.

Option 1: Stay in Oklahoma City on a five-year max contract.

Option 2: Stay in Oklahoma City on a one-year deal until the salary cap balloons after next season.

Option 3: Get swooned by Pat Riley.

So, what would you do?

4 days ago, KD on the verge of best run through the playoffs ever….now, epic choker needs the blueprint https://t.co/gWX3SsuoXD

2. THINK ABOUT IT SOME MORE

3. WRITING ON THE WALL

Well, let's kick it up a notch.

June 20th was the day the Heat won their first title. #staywoke

Our man Marc J. Spears took a look at the staggering lack of diversity in leadership positions in the NBA:

The NBA was composed of 74.4 percent black players in 2015, according to a study from racial equality activist Richard Lapchick. As for NBA presidents of basketball operations and general managers, the representation for African-Americans is quite the opposite for the 30 teams. The NBA has one African-American president in the Los Angeles Clippers’ Doc Rivers, two African-American GMs in the New Orleans Pelicans’ Dell Demps and the New York Knicks’ Steve Mills, and one native African GM in the Toronto Raptors’ Masai Ujiri, who is Nigerian. Since 2010, 30 NBA positions for president of basketball operations or general manager have been filled with six African-Americans hired, according to Comcast Sports Chicago “If 75 percent of the NHL’s general managers were black, I’m sure it would be a big issue,” one NBA assistant GM who declined to go on record told The Undefeated.