Even if one disagrees with Kevin Durant’s decision to play for the Golden State Warriors, this is inarguable: By going through a full recruiting process and allowing top teams to woo him and show him their plans of attack, Durant got super valuable information. He somehow picked the best, most loaded team in the league and got to hear what all the other elite squads in the league had planned.

This, which has dawned on Boston Celtic forward Jae Crowder, is not cool. On Thursday, during an appearance at the Basketball Hall of Fame, Crowder did not hold back:

“We were the only team in the NBA to beat [Cleveland and Golden State] on their home court. The only team in the NBA, the Boston Celtics,” Crowder told MassLive.com. “We told him that. We played him clips from both games and told him basically the scouting report of how we guarded Steph [Curry] and Klay [Thompson] — our entire game plan, basically. That’s what made me mad. We f—— told him everything we do to beat these guys, and we beat them, and he went and joined them. … Afterward, I was talking to Isaiah [Thomas], like maybe after you sit back, [we] shouldn’t have told him everything, but who the f— thought he was going to Golden State, realistically? It was like a slap in the face for us, basically.”

The honesty! (The NBA could use more WWE-style quotes like this.) Now, what Crowder says about the Celtics deserving a look because they beat the Cavaliers and Warriors on their turf? Nah. It’s like saying Durant should have considered the Milwaukee Bucks because they beat the Warriors first. Crowder’s second point, though, is interesting. You can’t really fault Celtics brass (or any of the teams who met with KD) for telling him how they planned to guard Curry and Thompson or what their big picture designs for the future are … but you can also see how revealing that can be damaging (and upsetting to Crowder) and incredibly helpful to the Warriors and their new star.

Even if Durant knew from jump street that he was picking between the Warriors and Oklahoma City Thunder, by taking meetings with six different teams, Durant has a whole lot now: The best backcourt ever playing behind him, envious teams around the league and precious intel.

As if the Warriors needed any more help.

LeBron James Jr. is back being WAY too good at basketball for his age.https://t.co/L2xlo788aP

The NBA officially announced that it pulled the 2017 All-Star week out of Charlotte, North Carolina. The league was dissatisfied with the state’s progress on altering House Bill 2. HB2 requires transgender and transsexual people to use the bathroom of their sex at birth and also infringes on basic human and civil rights of other LGBT members.

ESPN’s Ramona Shelbourne was at Team USA practice and asked New York Knicks forward Carmelo Anthony what he thought of the league’s decision.

The Hornets released a statement on the decision and announced the city will re-enter its name into bidding for 2019 All-Star Weekend. Estimates put the city’s loss revenue at close to $100 million.

The Miami Heat tweeted a photo of the team logo with pride colors as a show of support for the decision. 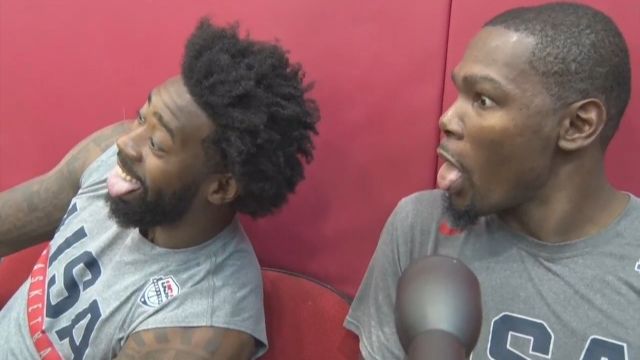 The Harvard Business Review found that critiques for black and Hispanic men were often about how the groups “lack polish,” while “white men were deemed coachable.”

The nation’s largest Hispanic art collection will be on display in San Francisco and will feature a Frida Kahlo exhibit.

Georgia accounts for almost 25 percent of all the Republican National Committee’s black delegates.

Ever wonder how Jackie Bradley Jr., Mookie Betts and the rest of the Boston Red Sox come up with their dance moves on the field? Ponder no longer.

this was so wonderful https://t.co/KAw7nL0U0D

Interview transcripts so far for the oral history of 'the wire.' Last interview was @AnwanBigGGlover (Slim Charles) pic.twitter.com/2TmGyLpzTJ

Kevin Durant pays homage to Tupac with a new tattoo (via @ThompsonScribe) pic.twitter.com/kzOr6uKUeM

Jon Stewart had a few words for the people who say they want their country back. pic.twitter.com/EIs9m5vkDI

On Thursday, our sis and culture editor, Danyel Smith, finally unleashed Dancing Dolls to the world. Writer Karen Good Marable gave readers an even more in-depth look on the Jackson, Mississippi, hip-hop dancers, who are putting the real in reality TV. The Dancing Dolls are the stars of Lifetime’s Bring It!, which is now in its third season. The story, as well as the show, spotlights coach Dianna Williams (Miss D) and takes folks into the heart of hip-hop majorette competitions. In addition to teaching her dancers about life and self-love, Williams just wants to win, baby.

This fevered SWAC experience includes thundering drumlines, high-stepping drum majors, and majorette teams (no baton, thank you) who are as poised as they are provocative. … Tradition, pride, blackgirlmagic, excellence, soul — SWAC could as easily be known as swag. And in its way, that swag is the bones of the Dollhouse. Bring It! is that rare reality show that seems, well, real. The girls are their hardworking, emotional, pouting and competitive selves. The show just doesn’t feel like it’s about honing in on the next big celebrity. Bring It! is about team pride, the thrill of victory, the agony of defeat, and about black girls defying odds in the poorest state in the Union, in the Old South where the Confederate battle flag still flies high. And right now, it’s all about winning Saturday’s competition. “I want,” says Coach D (or “Miss D” as the Dolls call her) through pursed lips, “toughness on the floor.”

I refuse to be silent @WNBA pic.twitter.com/INIAI1rSIF