We have to give some props to Oklahoma City Thunder big man Enes Kanter.

All around the country, when star players leave, there’s a certain segment of the fan base — usually a small, but loud, angry and bitter segment — that delights in taking old jerseys and dousing lighter fluid all over them, grinning manically as the gear gets engulfed in flames. Still, it’s a petty behavior that just looks bad. So Kanter has come up with a solution:

It saves money, time and most importantly, no one runs the possibility of getting lit on fire. We’re still interested in some honest discussion, though. So …

I wanna say THANK YOU to #HeatNation… I've read and felt you guys love from afar. thank you for appreciating my 13 years. #FamilyAlways

The hardest part was leaving u guys. Y'all have supported me thru all my UPs but most importantly my DOWNS.

I'm gonna miss running to the end corners of the court and the scorers table yelling "This is MY House!!!"

But Miami-Dade County to me..will always be Wade County!!!

I'll miss all my youngins but UD and CB I will miss like no other. I Love you both beyond words. #Brothersforlife

The reaction from Heat fans was swift and sad. Y’all got some Kleenex?

As soon as I start to get over it just a little bit… Wade tweets all that pic.twitter.com/vq6HVof6Z1

@DwyaneWade Come back. You can blame it all on me.

I feel like Wade just sat me down to break up with me and he’s recapping all the good times we had while moving his stuff out of OUR house.

I am crying at @DwyaneWade’s tweets right now. Full-cry. I’m 10 minutes away from ugly cry.

Man, Wade is BETTER than LeBron at this.

On Wednesday night, one New York Mets fan learned what happens when you call out Miami Marlins slugger Giancarlo Stanton: Sometimes you get got.

.@Giancarlo818 is prepared to

Problem is, Wednesday night didn’t serve as a lesson for Mets fans like it should’ve, because on Thursday night, fans heckled Washington Nationals outfielder and “Make Baseball Fun Again” spokesperson Bryce Harper. It didn’t go well. This is why you guys can’t have nice things.

On Thursday night, at the tail end of a Black Lives Matter protest to bring awareness to the deaths of Alton Sterling and Philando Castile and the condition of black people in America, a mass shooting took place.

The Dallas Police Department announced that five officers were killed and seven others were injured. One of the officers who died was a member of the Dallas Area Rapid Transit (DART), and the first to die in the line of duty since DART’s inception.

Three suspects were in custody before 12:30 a.m. per ABC News reports, and a fourth was confirmed dead at 3:30 a.m. after the police and suspect engaged in a standoff. One of the suspects informed police that there were “bombs all over the place,” but the police later determined that not to be the case.

By all accounts, the protest was peaceful. The DPD and protesters even took pictures together because both groups exhibited respect for one another.

Dallas media members reminded viewers and national media of this when the chaos broke out:

Something people should understand nationally — BLM & Dallas PD have respect for each other. DPD was protecting marchers. Snipers did this.

People following the media and other media members were reminded not to believe everything they saw amidst the confusion, and to only pass along vetted information. Even with that being the case, Corey Hughes was plastered over social media and became subject of national news close to midnight Thursday as a suspect in the shooting.

The Dallas Morning News captured the protesters’ initial reaction to the shooting, and Hughes was still on ground level watching the event unfold with other onlookers:

In addition to that, the police reported that the shots came from above, but have yet to remove the tweet naming Hughes as a suspect. CNN did a split screen with the Dallas police chief and Hughes’ photo.

Mark Hue's the man pictured carrying the fire arm is not the shooter. This is his brother Corey. Organized event. pic.twitter.com/swI5In9NFB

As of right now, little is known about the suspects. We’ll continue to update y’all as the day moves forward and more information is verifiable.

Beyoncé paused her Formation World Tour concert in Glasgow, Scotland, to have a moment of silence for victims of police brutality. She then proceeded to perform her song “Freedom.”

Rapper Webbie was at a march for Sterling, who was shot by a Baton Rouge, Louisiana, police officer on Tuesday.

According to CNN, a homeless man is the one who called the police on Sterling, after the 37-year-old wouldn’t give him money and showed the man he was armed.

A black man in Atlanta was found hanged from a tree in Piedmont Park. The police initially ruled it a suicide, but have since called in the U.S. Department of Justice to investigate the crime.

A mural was painted on the side of the Triple S Mart where Sterling was shot.

This is actually their facial expressions when you ask them to take a 3. pic.twitter.com/BLOaDWrLVN

i mean, weren’t a lot of good answers to give. so he came with that real. https://t.co/EYzfBNrMHi 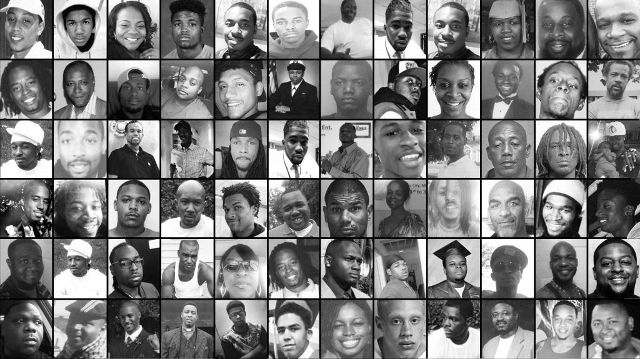