Who said Minneapolis isn’t cool? Kevin Garnett on the soul of a Twin City The Timberwolves legend talks Prince, a Janet Jackson lap dance and who he’s rooting for in the Super Bowl

One night in the mid-1990s, Kevin Garnett was hanging out with a few of his Minnesota Timberwolves teammates at South Beach, his favorite Minneapolis nightclub at the time. He saw a legend walking toward him.

The icon pulled Garnett to the side — Prince wanted to have a conversation about basketball. Prince loved the game, and he engaged young Garnett in a conversation. Music blared all around them, but the two men were focused on a shared love for a sport that they both played pretty well.

“We just had a connection right there,” Garnett said. “Sat there the whole night and talked, and I kind of forgot my night. He told us on Fridays that he [did] little minishows just to hear new music he curated. They were never short of eventful. Some of the stuff that he would play, I never heard it come out. The set used to start at 4 in the morning.”

It was the beginning of a friendship. Two giants in Minneapolis — one who towered at 6-foot-11 and would go on to lead the team to eight consecutive playoff appearances, and the other who, with more than 100 million records sold, was one of the best-selling and most influential musicians of all time.

“During the season, I couldn’t go to a lot of them,” Garnett added, laughing at the memory, “but … we had a blast with that, man.”

“I was coming with a raw edge that I wanted the city to embrace. And they embraced it. And I think I matured.” — Kevin Garnett

The experience Garnett had with Prince, and eventually with other greats such as superproducers Jimmy Jam and Terry Lewis, helped shape what Garnett thought of what many considered a stuffy city. When Garnett landed in Minneapolis in 1995, the fifth overall pick and the first NBA player drafted out of high school in 20 years, he wasn’t sure what to expect. For the South Carolina native, the snow was a real concern, even after high school in Chicago. And he’d heard things that gave him pause, including an influx of gang culture.

But he was ready to dive in and make Minneapolis home. The city was known for contributing so much to pop music by way of genre-exemplifying musicians such as Prince, Jam, Lewis, Morris Day and The Time — artists that all soundtracked the ’80s and ’90s and paved the way for rhythm and blues music to reach some of its greatest heights. 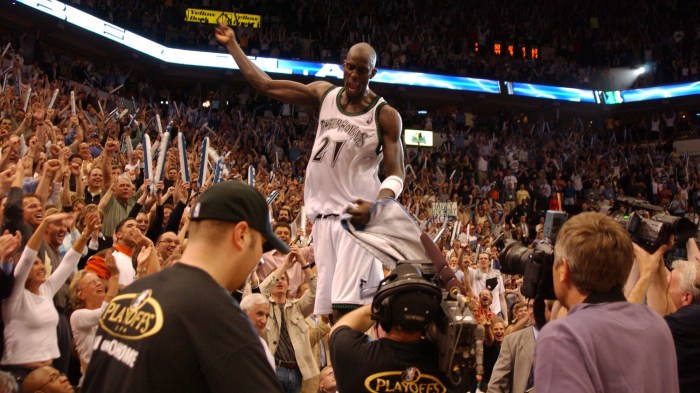 What was missing around the time Garnett arrived was a daily feeling of how deeply Minnesota musicians had contributed to pop culture, and changed the world. The world most certainly knew, considering that by the late ’80s the Grammy-winning Jam and Lewis were household names in black families, known for their creative partnership with Janet Jackson, reviving influential singing group New Edition and creating their Flyte Tyme productions, which has worked with everyone from Alexander O’Neal to Mary J. Blige to Michael Jackson.

But locally? There wasn’t even a radio station that consistently played the music the area most famously was responsible for. No urban music radio station was in Minneapolis in the mid-1990s, when hip-hop was rising up the charts and R&B music was ubiquitous? “I was like, Whaaaat,” Garnett said with a laugh.

But change was a-coming.

It’s the city in which Garnett, the Boston Celtics champion, became a superstar, and this weekend it’s hosting the biggest game in professional football. A Super Bowl Live music festival has been going on for a week along Nicollet Mall, and among other funky cultural moments, there was a massive Prince tribute Tuesday. In the past two decades, the city has evolved greatly. When the future first-ballot Hall of Famer landed in Minneapolis, whether he knew it or not, his arrival signaled change. He was ready to win and bring a championship to the Twin Cities. “After making the All-Rookie Second Team during his rookie season,” says the NBA’s site, “Garnett skyrocketed to stardom in his next two seasons with averages of 17.8 points, 8.8 rebounds, 3.7 assists, 2.0 blocks and 1.5 steals.”

The young man who would become a 15-time All-Star had a great jumper, low post moves and an impressive defensive presence. Someone with that size and skill who lacked an awkwardness you might normally find in a big man? Forget about it. And he brought an excitement to the city that needed a good basketball team to root for.

Prince was the Commander-in-Chief of Culture. And Garnett was the Prime Minister of Cool. “I don’t know, in particular, which [parts of] culture I did bring, but I’d definitely say I was part of the wave, and I helped … tried to give it a different taste … with music, sports, a lot of things at the time weren’t being done.” Garnett said he felt a responsibility to the city. “I was coming from a hard background,” he said. “I wasn’t going to be afraid to show emotion. I wasn’t going to be afraid to say, ‘I like this’ or ‘I love this.’ I wasn’t going to be afraid that I didn’t speak correctly, or that my teeth were jacked up, or that my hair needed to be cut. I was coming with a raw-ass edge that I wanted the city to embrace. And they embraced it. And I think I matured.”

By the summer of 1998, Flip Saunders had coached the Timberwolves to the playoffs. Garnett and Stephon Marbury were hailed as two of the NBA’s best emerging talents. Garnett made it to the 1998 NBA All-Star Game, and the playoffs, but his team was ultimately eliminated by the Seattle SuperSonics in the first round.

But there was still reason to celebrate that summer. Per usual, the Target Center, where the Timberwolves ball, was thriving in the offseason with some of the biggest names in music. Perhaps the biggest performer to come through that summer was Jackson, who was in the middle of her Velvet Rope tour.

The concert date was special for Jackson. Minneapolis was like a second home for the pop superstar; it’s where her life became legend. The youngest of the Jackson clan, she’d spent the fall of 1985 in the city at Flyte Tyme working with Jam and Lewis on what would become one of the most influential projects of all time, Control. For 1997’s The Velvet Rope, her sixth studio effort, she’d spent half a year recording in Flyte Tyme’s studio. I was at the show. I’d spent that summer interning in the entertainment section at the Minneapolis Star Tribune and had bought some nosebleed tickets along with a few fellow interns.

One of the most memorable moments was seeing Jackson pull Garnett up on that stage for a lap dance. The audience went wild. Their biggest star athlete was on stage, on the court where he’d spent the past three seasons balling out, with one of the world’s biggest stars.

“Try getting a lap dance by Janet Jackson with your girlfriend watching. You talk about pressure? You talk about control?! I just had to keep it together,” he said with a laugh. It wasn’t all bad. His girlfriend at the time, Brandi Padilla, is the sister-in-law of Jimmy Jam. Garnett and Padilla married in 2004.

Garnett isn’t quite sure where he’ll be this weekend as the world arrives in Minneapolis. But he’ll be celebrating the fact that this city, the one he helped to make cool, is hosting the big game. And in case you’re wondering, he’ll be rooting for the New England Patriots.